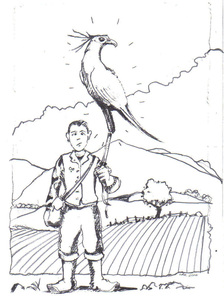 Below are some of my adventures, mistakes and rambling thoughts on falconry, Birds of Prey and related subjects.

"Vultures and vampires ...." is how not to purchase a Valentines Day present, while "Alice" and "Only A Bird" are stories about a female Sparrowhawk I flew for ten years and probably the best hunting partner I will ever spend time with.

I have kept Birds of Prey for decades, since I was in my early teens. Please feel free to click on one or two and hopefully enjoy....

As I am writing this I am also looking out the window at Alice in her aviary, sitting as usual next to her mate in an open fronted pen, surveying as only a queen can, over what she knows to be her territory. She is nine years old this year, and looks out over the scratching chickens and watches the children and dogs play with disinterest. Further along the row of aviaries are other hawks and falcons I have hunted with over the same distant hills and fields, but none of them can claim to own the view as she can... Read more »

The black cloud is darker today. It’s August and the sun is shining but I can feel the weight of a cloud hanging over me as I take her up in my hands. I know she is gone as I hold her weakened body, her feathers perfect and her eyes once so bright and menacing are fading fast as she looks at me... Read more »

“You don’t do that, do you?’’ I Once sat at a table with some well known British falconers, purists from ‘Ye Olde Skool of Fauconrie’- you know the type, and when I happened to mention that my female redtail was catching rabbits both day and night. I couldn’t believe the reaction it got, ‘It’s unnatural’, ‘hawks shouldn’t fly at night’, ‘that’s not cricket’. Luckily for me nobody was armed, the fact we had just finished a conversation about another traditional past time; adultery, didn’t seem to bother them at all.Lamping with a hawk does seem to be a controversial subject, it is unnatural, it is definitely not cricket, but it can be very fruitful. The only argument against lamping with hawks that I do agree with is that the flights are not as spectacular asdaytime flights. You lose a lot of the excitement of the hunt; the hawk will either catch its prey or return to you for the next try. If you do it for pest control reasons, though, the purists don’t seem to mind as much. So I suppose it’sall right to do it – once you don’t have any fun!... Read more »

The best and the worst of hawks.

There are two types of falconers in this world; those that love Harris Hawks, and those that don’t. If everyone loved the same things, if everyone agreed on everything and thought the same the world would be a less colourful and interesting place, so this surely can only be a good thing... Read more »

Hello, my name is …………, I want to get into falconry and I was half thinking of getting a ……. (in this space put anything from a bat falcon to a lammergeyer), but, the only birds available seem to be redtails and harris’s. Are these good beginners birds?’ This type of phone call is getting more common (which is OK by me), but before giving my usual answer of yes and no, I’ll try to explain... Read more »

The burden of weight.

When I was a beginner I knew everything. Now as I learn more about falconry I realise just how little I do know. Falconry, I read, hadn’t changed in thousands of years. I enjoyed reading about the different aspects of falconry such as rook hawking, game hawking, flying merlins and sparrowhawks and each one I mentally ticked off as something that I would master with time. Images of a trained sparrowhawk bursting through a flock of feeding pigeons, or a ringing flight with falcon and prey disappearing into the clouds kept me awake many a night. So that was my plan, get all the equipment, a good food supply, not forgetting the bird and the rest will fall into place. The birds flying weight for example I thought was carved in stone, the perfect weight for each particular bird was discovered during the training programme and that was the weight that bird would fly at for the rest of its natural life. I quickly learned that this was untrue and more effort was spent chasing the hawk’s perfect hunting weight than in the actual pursuit of prey!... Read more »

What’s the little hat on the bird’s head for?” “Ah that’s just to protect his eyes so they don’t get damaged when he’ flying” Hoodwinked, another falconry word that found its way into everyday usage. I looked it up in the dictionary: to dupe or trick. I must not be very bright because every time I ever tried to trick a raptor I always ended up losing blood. Now I don’t for one minute believe that blindfolding a creature tricks it into thinking that its night time, but it does have the same desired and instant effect... Read more » 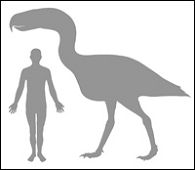 When birds ate us.

Not so long ago, well a few millions years ago, there was a bird that was the absolute master of its world. Today we consider the eagle to be the ultimate predator and top of the food chain, and rightly so, as there is no other bird or beast that can master it or regularly use it for food... Read more » 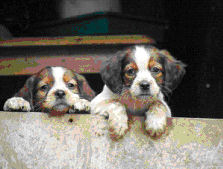 Different people have different ideas of what dog makes the perfect hunter’s companion. For some it’s the hyper-active Springer, a dog that just doesn’t let up and leaves no bush unturned. For others it’s the new world Labrador, a true gunner’s dog and a specialist retriever and if given a chance can be a good all-round hunter too. Many breeds that have been excellent hunters, finders and retrievers of game have sadly disappeared or become so rare in the field that they no more get a mention in working dog tales; Poodles come to mind, once thought to be the smartest of all working breeds, and the King Charles Spaniel, a small French breed, probably (and this is only my opinion) used in French falconry as the sparrow-hawkers companion, why else have such a small falconry spaniel in the field unless it was for use with sparrow-hawks or maybe with Hobbies or Merlins […] Read more »

Honestly, I don’t even know where to begin on this one. I suppose it started back in February with a guy who I did not even know, clicking the “enter” button after placing an advert on the web. But then again maybe it had started months before when I dropped food into my pair of Lanner Falcons in a seclusion aviary and only one of them made an appearance that day and came down and showed interest in the food. Seclusion aviaries are used for a pair of falcons or hawks to breed in. Leave them alone with peace and quiet hawks and these birds should, in theory, breed away to their hearts content. With a half open roof so they can watch and enjoy the season’s change, a covered area so they can enjoy their nest ledge away from the wind and rain, and a peep-hole so a human like me can keep a close eye if things went wrong... Read more »

I made an awful bad mistake the other day. I put the birds out on the lawn to weather, this means to get them out of their night quarters, let them get some sun, fresh air, and to take a bath or a drink if they need it. It was a beautiful sunny day and on days like that I like to get them out early so they have all day to enjoy the weather, while obviously making sure they don’t overheat. But this is Ireland and they spend far too many days indoors waiting for the rain to stop... Read more »

I lost my good female Harris Hawk “Martha” the other evening. It was five o’clock and the rabbits were just starting to pop their little heads out into the evening sunshine to feed. Just like I had done hundred times before, I unloaded herself from the jeep, quietly closed over the door and snuck over the brow of a certain little hill to let her see the rabbits feeding below. The hill dropped steeply down to a laneway and there was a thick old hawthorn hedge bordering the grassy field where rabbits were plentiful. As soon as we peered over the hill a half-grown bunny high-tailed in across the lane toward cover and off she went in pursuit... Read more »

When I was a kid I used to spend my time walking the hills with the dogs. I would walk for miles along the beaches in Winter-time when no one was about, or to distant fields or any piece of waste ground in the chance of spooking up a rabbit for the dogs to chase... Read more »

It is days like today that makes living in Ireland tolerable. After the rain last night, today dawned a beautiful crisp clear morning and a more perfect day for flying falcons would not be possible. There was a good stiff breeze blowing as I gave my Saker falcon his daily exercise; stooping him at the lure to tire him out and build up some muscle. I gave him about five or six minutes of that and he was panting hard as I let him catch the lure... Read more » 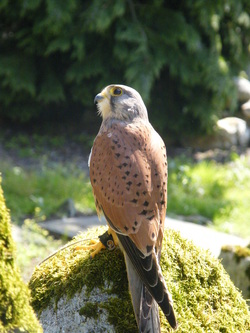 My first ever bird of prey was a kestrel. I was about fifteen years old and fascinated by hawks of all kinds, so when a young kestrel was handed to me after it had obviously fallen out of a nest I was more than ready for the challenge. I trapped mice and starlings to feed it on and the lurchers were kept running through the nights to make sure there was always rabbit meat available. After spending weeks rearing him, re-reading every falconry book I could lay my hands on and then training him to come to food in the kitchen, it was time to fly him free outdoors. That’s when I lost him. In the local football field, early one summer’s morning before anyone was about, I flew him two or three times to the glove and on the last flight he simply drifted away, over the roofs of some houses and by the time I got around there he was gone, never to be seen again... Read more »